On Sunday 8th of November 2015 1st Madrid attended the Remembrance Service at St George’s Anglican Church to honour the people who helped keep the world safe during times of conflict. One of our Scouts read a line in the service. We all sat quietly during the two minute silence.
We were particularly moved by the Kohima epitaph read by an ex-serviceman: 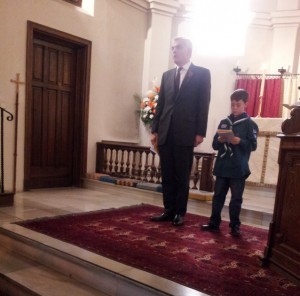 When you go home, tell them of us and say
For their tomorrow, we gave our today.

He let the Scouts touch the bearskin hat and even let them try it on.