On May 14th & 15th 1st Madrid celebrated its yearly combined summer camp in which all sections took part. The older children (Cubs, Scouts and Explorers) camped under canvas at the campsite in Cervera de Buitrago whilst the youngest children (Beavers) slept in dorms at the hostel up the road from the campsite.

The day began at 10am with Cubs, Scouts and Explorers putting up their tents, with Beavers watching and learning.

Cubs and Scouts began to set the camp:

The opening ceremony was led by Group Scout Leader Alan and he introduced our special visitor, Su Shaw, who travelled from Alicante to help out at the camp and train the 1st Madrid leaders .

After the ceremony the sections split up in order to carry out different age-appropriate activities.

Cubs, Scouts and Explores went for a long hike

After a lunch break to recover their energy and strength, they enjoyed some games and activities during the afternoon

At night, a nice meal at the hostel with all the sections together

And enjoying the show performed by the Beavers with their Leader Dominique.

The theme of the Beavers camp was “The Jungle Book”. 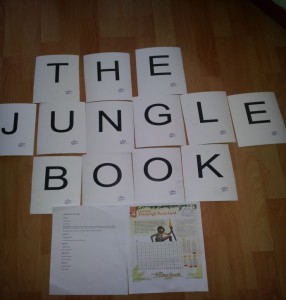 They went to the hostel, where they slept at night.

Some of the Beavers got a ride to the hostel in a very cool car!

Beavers took their bags to their rooms & whilst two adults made the beds (with a little help!)…

… we played a game to break the ice as there are still some new Beavers in the Lodge.

After the game and after our snack, we went out for a walk by the lake.

Whilst we ate our lunch, one of the adults went ahead and hid some letters on the trail on the way back to the hostel. We had great fun finding these letters and working out what they said by putting them together and eventually finding that they spelt out THE JUNGLE BOOK.

After the walk we set about doing raft building, first with breadsticks and strawberry laces, but then at the campsite with plastic bottles, bamboo sticks and string.

Whilst some of us were building rafts, others were learning Hindi and drawing henna hands.

Then it was time to try the rafts out on the lake. We took an elephant from our “jungle” to float on the rafts. By the end of the afternoon the elephant was re-named Ele-wet because she got rather soaked in the process.

It was finally time for dinner and to catch up with our older brothers and sisters in other sections. Yummy!

We were so exhausted that we got ready for bed quickly and were asleep (the girls, anyway) by 10pm.

That evening the leaders had a meeting at the campsite whilst we all slept.

Breakfast the next day was at 8am at the hostel with all the sections.

After breakfast we went out and played football and had fun in the park before our final activity – an obstacle course to rescue some jungle animals from a ferocious tiger! It was great fun!!

We packed our bags, said goodbye to the hostel and walked back to the campsite to join the rest of the troop.